Our green clay is considered The Queen of Clays, is characterised by the presence of the purest and highest concentration of Montmorillonite, more than 97% of the total mineral. Rich in oligo-elements and mineral salts, our Premium green clay has a naturally high alkalinity of 8.8ph and a strong negative ionic charge. With this remarkable clay and its incredible properties, it's ideal for skincare use. Suitable for normal to greasy skin.

Whilst we can no longer advertise this product as food-grade due to a clampdown by trading standards (who don’t want any clays advertised this way), we know many people that love using it internally. This clay is ultra-pure, clean, allergen-free and high in beneficial trace elements 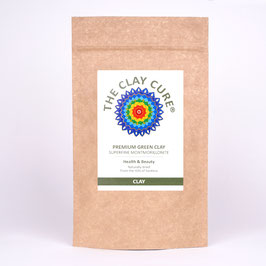 From the hills of  Sardinia

Particular attention is paid to the quality of the materials selected. Our clays are non-ionized, without preservative, without coloring and come from isolated quarries and in wild environment.

Our supplier adheres to the Ecocert / Cosmos standard for ecological and organic cosmetic raw materials.

Our  Green Clay has enormous absorbent powers due to the constitution of its micro molecules. It literally “drinks” oils, toxic substances, and impurities from your skin. Its toning action stimulates the skin. Green clay is excellent for helping to clear occasional skin blemishes. Use it daily on trouble spots, or weekly as part of a complete facial treatment.

Our  Green Clay is quarry mined from naturally occurring deposits in Sardegna and is untreated, with a beautiful light green colour and soft texture.  Green Clay is sometimes called Sea Clay and is by far one of the most majestic, most effective, and most commonly used mineral skin clays found in the world. It contains a cornucopia of valuable elements. Green Clay owes its colouration to two very important factors: iron oxide and decomposed plant matter. That’s right, the natural green tones found in this luxurious clay are from the very cycles of life that the earth uses to regenerate herself. Unlike other clays where key elements work in symbiosis off of each other.

Green clay contains several elements which act as their own “body,” meaning that each element is responsible for working the outer epidermis in its own way and in dispensing their biological constituents as best as possible.

Contrary to popular belief, not all  Green Clay originates in France. At one time, all of the world’s supply was mined in France. As this Clay became more popular, similar deposits were found in Wyoming, Montana, China, and other European countries.

The Healing power of Clay by Raymond Dextreit
£7.50 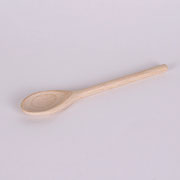 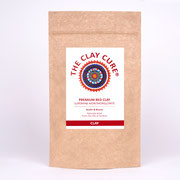 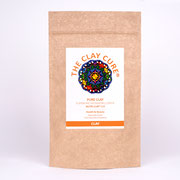 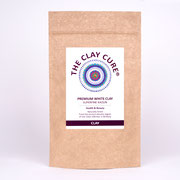 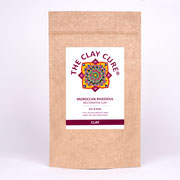 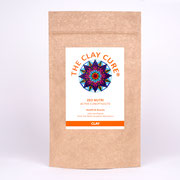 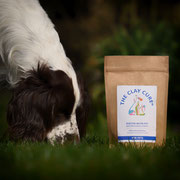